Wal-Mart and the Apollo Group, owner of the University of Phoenix announce major mega-merger

Stocks rose sharply today based on the recently released news that the retail giant, Wal-Mart, the biggest employer in America, will be merging with the Apollo Group, owner of the University of Phoenix (UOP).

Although not all details of the merger have been made public, reliable reports have noted that the merger, which has been in the making for years, will see the retail giant now able to offer education directly at Wal-Mart stores.

“This is a great opportunity for consumer-students”, said Andy Barger, spokesperson for Wal-Mart.  “Now, Wal-Mart will do what it does best in retail sales with higher education”, said Barger.  “Now that people understand that education is a commodity, just like soap or sirloin, they will begin to see the consumer benefits in ‘One Stop Shop Education”, he went on.

The idea, according to sources familiar with the merger, is that the financial aid offices will work right out of the Wal-Mart store.  This will cut down on the need for controversial recruiters who have been accused of hustling students into the University of Phoenix.  With millions of Americans consumers at Wal-Mart, they will now see the UOP banner when they come into stores and all they have to do is just sign up.

Student loans to go to the new Wal-Mart school will continue to be available.  So will Title IV funds meaning that Wal-Mart will have a pipeline into taxpayer’s money.  But the retail chain is the leader in customer service and satisfaction and an unnamed spokesperson in the federal government was not only pleased with the merger, but under anonymity stated, “This is going to be the best use of taxpayer’s money I can think of.  Wal-Mart is known all over the world, so why not take this opportunity to bet on America.”  He also commented that the Department of Education is working with the retail chain to assure a smooth transition and friction free transfer of public funds.

Dan Esplansky, from the Department of Education told The New York Times that, “The DOE applauds this move by Wal-Mart and Apollo.  We think that Americans will profit generously from the merger and we, well you might say, are saddled up and ready to make this whole thing work.”  “We have to”, he added, “this is our kids we are talking about.”

Maiba Williams, the CEO for the Apollo Group commented that, “This will be a boon for consumers.  We really think that our customers will see how exciting an opportunity they have to shop and get educated.  Just think, after or before you shop you can just go online at Wal-Marts and get the education you have dreamed of and at a fraction of the cost.”

Students and parents seem to agree.  “Wal-Mart has always been a friend of the community and to America”, said Emelia Morales, a student at one of the remaining public junior colleges.  “I have always wanted to go to Wal-Mart for school since we hang out there so much anyway”, she added.

June Breakheart, a parent of a college-ready consumer remarked, “It is so nice to see two responsible parties meet up in the marketplace so they can offer more advantages to our kids.” 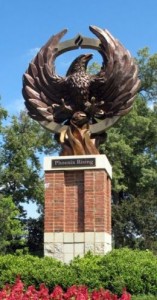 Wal-Mart spokesperson, Andy Barger also stated that in the future Wal-Mart will be working with Amazon to develop bookstores for higher education at the Wal-Mart outlets.  These bookstores will also offer educational products, tee-shirts, mugs and other retail items.

For the legacy of John Walton, the benevolent and enlightened founder of Wal-Mart, this is like a dream come true.  Though deceased, the former philanthropist would be thrilled, for as most people know, he spent his life fighting for decent education in America.  A spokesperson for the Walton family said that if he was alive today, the founder of Sam’s Club, now Wal-Mart, would be ‘swaddled’ in tears of delight.

Wall Street was expectantly ecstatic and hansomely rewarded investors.  Amazon saw its stock rise over 10% today after the news was made public.  Wal-Mart stock closed at record highs as did the Apollo Group stocks.

2 Responses to “Wal-Mart and the Apollo Group, owner of the University of Phoenix announce major mega-merger”