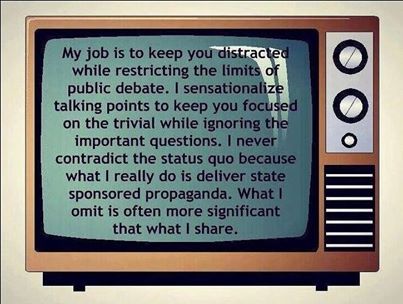 The US Senate just reported our tax money is being diverted to professional sports teams in contracts to sell US wars to sports fans. The .01% Pentagon “leadership” did not cooperate with the Senate to disclose the “nature and extent” of these contracts.

.01% corporate media is again exposed for hiring weapons manufacturers’ employees to sell unlawful war on Syria to television viewers: 22 different men claimed as “experts” without disclosing they work for businesses that sell the very weapons that would be used on Syria.

Syria is the latest target after ongoing sales pitches to do Iran failed. All-importantly: all recent and current US/UK/Israel armed attacks are in Orwellian opposition of war law. Two world wars resulted in two legally-binding treaties that make armed attacks on other nations illegal unless under attack by that nation’s government. All military are trained to refuse unlawful war orders (there are no lawful orders for unlawful war), with officers trained to arrest those who issue them.

But this is “business” as usual for US .01% oligarchs. The most revealing testimony was three weeks before W. Bush’s election for a second term in 2004 with Senior Advisor and Deputy Chief of Staff, Karl Rove, chiding Pulitzer-winning journalist, Ron Suskind, in a rare admission of naked truth. Rove said:

Guys like [Suskind] were “in what we call the reality-based community,” which he defined as people who “believe that solutions emerge from your judicious study of discernible reality.” … “That’s not the way the world really works anymore,” he continued. “We’re an empire now, and when we act, we create our own reality. And while you’re studying that reality—judiciously, as you will—we’ll act again, creating other new realities, which you can study too, and that’s how things will sort out. We’re history’s actors…and you, all of you, will be left to just study what we do.”

The 1975 Church Senate Committee hearings had the cooperation of CIA Director William Colby’s testimony for the stunning disclosure that over 400 CIA operatives were controlling US corporate media reporting on specific issues of national interest in Operation Mockingbird. This game-changing testimony was confirmed by Pulitzer Prize reporter Carl Bernstein’s research. Of course, corporate media refused to publish Bernstein’s article; it became a cover-story for Rolling Stone. Bernstein provided additional information of CIA control in the Senate report and corporate media subsequent “reporting”:

“Pages 191 to 201 were entitled “Covert Relationships with the United States Media.” “It hardly reflects what we found,” stated Senator Gary Hart. “There was a prolonged and elaborate negotiation [with the CIA] over what would be said.”

Obscuring the facts was relatively simple. No mention was made of the 400 summaries or what they showed. Instead the report noted blandly that some fifty recent contacts with journalists had been studied by the committee staff—thus conveying the impression that the Agency’s dealings with the press had been limited to those instances. The Agency files, the report noted, contained little evidence that the editorial content of American news reports had been affected by the CIA’s dealings with journalists. Colby’s misleading public statements about the use of journalists were repeated without serious contradiction or elaboration. The role of cooperating news executives was given short shrift. The fact that the Agency had concentrated its relationships in the most prominent sectors of the press went unmentioned. That the CIA continued to regard the press as up for grabs was not even suggested.”

Importantly, US corporate media today is heavily concentrated in just six corporations, making the message much easier to control.

US corporate media lie to allow torture, a War Crime, as official US policy:

US .01% corporate media lie to allow a million children to die excruciating deaths from poverty every month:

And check this “reporting” from the NY Times to bury after the comics the largest meeting of heads of state in world history. The topic was ending global poverty with proven solutions that, yes, was an investment of only 1% of the developed nations’ income. I had personal experience with this. Of course, the .01% in political “leadership” of both parties reneged on every promise to end poverty, with corporate media allowing the story, and a million children every month, to die.

Polling proves the 99.99% are waking to US corporate media lies:

Corporate media won’t report the following polling data, but the American public have noticed something is very wrong with their “news” both as reported by government and regular media.

In 2010, only one in five Americans reported trust and satisfaction with their government (and here). In 2014, Gallup reported Americans’ confidence in Congress at the historic low of 7%, while 7% reported their confidence level at “none” and half as “very little.”

According to a 2007 poll by the Pew Research Center, the majority of the American public see the US major media news organizations as politically biased, inaccurate, and uncaring. Among those who use the Internet, two-thirds report that major media news do not care about the people they report on, 59% say the news is inaccurate, 64% see bias, and 53% summarize their view on major media news as, “failing to stand up for America.” In their 2009 poll, “just 29% of Americans say that news organizations generally get the facts straight, while 63% say that news stories are often inaccurate.” Gallup’s 2014 poll recorded the lowest ever US public confidence in accurate news reporting from corporate media’s television news: 18%.

A June 2010 Rasmussen poll found 66% of voters “angry” at the media, with 33% “very angry.” Rasmussen also found 70% “angry” at current federal government policies. The most current Gallup poll in 2012 shows Americans’ distrust at an all-time high in the reporting from “mass media — such as newspapers, TV, and radio”: 60% have either “not very much” trust and confidence or “none at all” to “reporting the news fully, accurately, and fairly.”

The genesis of oligarchic control of American major media was reported in the US Congressional Record in 1917. US Congressperson Oscar Callaway claimed evidence that J.P. Morgan had purchased editorial control over 25 of the nation’s most influential publications in order to create public support for US entry into World War 1 and his new banking legislative victory: creation of the Federal Reserve system. Mr. Callaway’s colleagues voted down an official investigation. Read this to see how even Abraham Lincoln’s powerful prose to explain and document how US war on Mexico was in obvious treaty violation didn’t have the votes to stop it. And read this to see how ridiculous the spin for US involvement in WW1 was compared to the absence of any threat to national security, followed by the .01%’s violent suppression of political dissent allegedly protected by the 1st Amendment.

Of course, corporate media owns the history textbook publishing companies that “taught” you this history with the lies of omission of Lincoln’s actions to point to the rule of law and what you’ll recognize from WW1 history.

This is what the criminal .01% do when confronted with real change:

Dr. Martin King was assassinated by the .01% to stop his “Occupy DC” plan for the summer of 1968. This is a legal fact; the verdict of the King Family Trial against the US government. This, of course, was ignored by corporate media and never spoken of by the .01% in politics today when they “praise” Dr. King’s life. Read this for the full story (you owe it to Dr. King to know the full truth); the trial evidence agreed as comprehensively valid by the jury includes:

“One thing we have endeavoured to observe most scrupulously, namely, never to depart from the strictest facts and, in dealing with the difficult questions that have arisen during the year, we hope that we have used the utmost moderation possible under the circumstances. Our duty is very simple and plain. We want to serve the community, and in our own humble way to serve the Empire. We believe in the righteousness of the cause, which it is our privilege to espouse. We have an abiding faith in the mercy of the Almighty God, and we have firm faith in the British Constitution. That being so, we should fail in our duty if we wrote anything with a view to hurt. Facts we would always place before our readers, whether they are palatable or not, and it is by placing them constantly before the public in their nakedness that the misunderstanding… can be removed.” –  Mohandas K. Gandhi, Indian Opinion (1 October 1903)

“‘A time comes when silence is betrayal.’ That time has come for us…

The truth of these words is beyond doubt but the mission to which they call us is a most difficult one. Even when pressed by the demands of inner truth, men do not easily assume the task of opposing their government’s policy, especially in time of war. Nor does the human spirit move without great difficulty against all the apathy of conformist thought within one’s own bosom and in the surrounding world.” – Dr. Martin Luther King, “Beyond Vietnam: A Time to Break Silence.”