(SATIRE) Obama: TPP a secret treaty because ‘US War on Terror requires secrecy’ 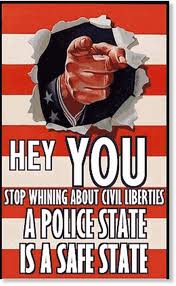 (Satire): President Obama announced at a White House press conference today in the Rose Garden that the Trans-Pacific Partnership (TPP) trade treaty details must remain secret because the now 14-year-old US War on Terror requires secrecy from terrorist enemies, secrecy is the founding principle of American freedom, and that secrecy equals safety. Press conference excerpts:

President Obama: As you know, secrecy is a foundational principle of American freedom. From the Founding Father’s secret “Committees of Correspondence,” to Boston’s Old North Church spy signal of “one if by land, two if by sea,” to Alexander Hamilton, James Madison, and John Jay using the secret name, “Publius,” to publish The Federalist Papers to win support for our Constitution, American patriots have used secrecy to protect our great nation. Secrecy equals freedom.

This is why the current Trans-Pacific Partnership treaty, TPP, is a classified national security secret that cannot be disclosed to the public, even four or more years after it is passed into law. Secrecy keeps Americans safe.

I also remind everyone that America is fighting a War on Terror, and that even after 14 years of brave combat and support of the American public, the terrorists are not defeated. War requires secrecy to keep our troops as safe as possible. TPP makes America stronger, which supports our troops.

Q: Sir, what about the “fast track” that violates the US Constitutional requirement that all treaties be ratified by the Senate under at least 2/3 vote?

Obama: The United States is a democracy. Fast track authority was passed into law by Congress. When Congress has the votes and the President approves, that’s the law of the land.

Q: I’m sorry, Mr. President; but how can Congress and you violate the Constitution by ignoring the 2/3 vote requirement just because you say so?

Obama: (chuckles) That’s a secret. I could tell you, but then I’d have to kill ‘ya. (press laugh nervously)

Q: Sir, we understand how military planning requires secrecy, but how does a treaty on trade require secrecy?

Obama: Let’s go back to 9/11. If the location of the World Trade Center and Pentagon were secret, would terrorists have been able to attack them?

Obama: Exactly! TPP has to remain secret to protect American trade from terrorists. If the terrorists don’t even know what TPP is, they can’t attack it!

Q: You can’t argue with that logic, sir! Who are the terrorists who would want to attack American trade?

Obama: There are two. The first is China. Nobody wants China to do a 9/11 on American trade! As I’ve said, “If we don’t write the rules, China will.”

The second threat is the American people. Homeland Security will be updating their slogan: “All Americans: Terrorists or potential terrorists. If you see something, call the American terrorist hotline.”

I know the idea of American terrorism might be hard to get used to, but let me explain: when you go to the airport, TSA gives a security screening to everyone as a potential terrorist. This is because your government wants to bring you the highest protection possible. And Americans can be terrorists; consider Sandy Hook, the Boston Marathon bombs, and now Charleston.

Q: Sir, I’m sorry: I don’t understand how Americans threaten our own trade.

Obama: That’s ok: it’s my job to sell this. All Americans are terrorists or potential terrorists to our economy because they work to maximize their own profits. This conflicts with our economic job-creators who work together as oligarchies to maximize their own profits: about $30 trillion in off-shore tax havens in current total holdings. They need this profit to motivate their job-creating. If we allow ordinary Americans to follow their own interests, folks might start thinking about banking structures that maximize public benefits rather than bank profits. This thinking would be the beginning of the end of our financial system. The public might think about debt-free money that ends national debt, demand the return of the trillions we’ve taken from them for “investments” in CAFRs, and not stop until they had full-employment for infrastructure investment.

Q: That’s a lot, sir: can you put that into a sound bite?

Obama: Yes. US trade oligarchs are asset-holes. Trade and economic policy that helps the 99.99% rather than our asset-holes’ profits is terrorism. We kill terrorists.

Q: Thank you, sir. Speaking of killing terrorists, how long do you think the War on Terror will last?

Obama: God only knows. Consider history: the Wars on the Roses lasted 32 years. Even then, roses were not defeated. I mean, look around you; we’re in the middle of a rose garden.

Q: First, it’s the Wars of the Roses, not some war on roses. But this is what I really want to ask: Mr. President, how is this 14-year-old war on “terror” even legal, given two US treaties after both world wars expressly making our armed attacks illegal? I mean, even the US Army’s law handbook clearly explains “preventative self-defense” is illegal.

Obama: Thank you for your question; I have a definitive answer for you.

(Obama places a finger on his nose, and smiles at the reporter. A small bird-shaped drone descends from a tree behind the reporter. The drone injects a needle into the reporter’s neck; he drops to the ground. Two Secret Service agents drag the body away.)

Obama: Here’s a secret for you, press corps: this reporter was a designated “unlawful enemy combatant” under the Military Commissions Act (MCA). He was an example of an American terrorist. Under authority of the US Constitution as Commander-in-Chief of US military, I ordered his drone assassination by lethal injection.

His disrespect for our troops, to question their commitment to protect America, also classified him as an “unprivileged belligerent” under the Defense Department Law Manual, and I have no legal prohibitions for drone use against any terrorist threat.

The answer to his question of how US wars on eight current nations are legal: it’s a secret.

I assume that’s your last question for today?

Q: One more, sir: we all know it’s legal to assassinate American domestic terrorists, of course.

Obama: Of course. As Peter King, Chair of the House Committee on Homeland Security says, it’s “totally right, totally Constitutional.” And if you question this, you’re a “horrible moron.”  It’s now US law to stop terrorists before they have a chance to kill. All associated deaths are the fault of the terrorists, and Attorney General Holder affirms we can kill anyone we say is “engaged” in combatting America. After all, as Commander-in-Chief I respect the military Oath to defend against all enemies, foreign and domestic.

Let’s end on a happy note. We’ve received hundreds of responses from school children to help people understand how drone kills around the globe protect America’s freedoms. We’ll put this catchy-one on-screen from an elementary school student for everyone to sing-along: it’s called the Drone drone (everyone stands to chant):

D is for death that comes from the skies!

R is for respect in all the world’s eyes!

O is for Obama – bringer of peace!

N is for niceness – what the US seeks!

and E is for everyone under control!

(non-satiric note): Explore the links for historical connections and Orwellian acts of US government in the present. The most elegant solution is for Americans in military and government to recognize “emperor has no clothes” unlawful orders, refuse them, and arrest those who issued them.

And to learn more of TPP, here’s Ellen Brown in a 16-minute interview with USAWatchDog: