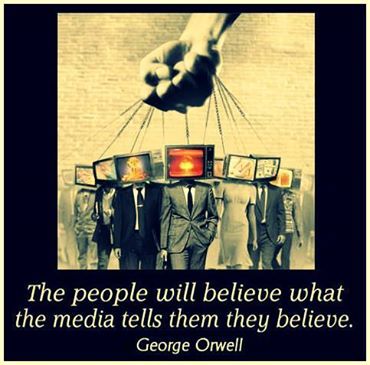 In the Now’s 2-minute video compilation of CNN orchestrating blame of all Muslims for terrorism:

Earth’s history includes bigotry against religions, ethnicities, women, gays, and even left-handed people. This uncontested history is so well-documented and uncontested that I won’t bother to provide links. Because bigotry lives in irrational language, the same attacks on Muslims the above video reveals from corporate media could just as easily be applied to another group: “Americans.”

From my article that imagines if what the US does to Iran was done to the US by China:

While “officially” China says Christianity is a respectable religion, their media stoke fears that Christian extremists are in charge of the US. Many Chinese view Christians with fear, thinking we want to convert the world because we think any other religion leads to hell. They point to the Crusades, hundreds of year of religious wars, and the Spanish Inquisition as evidence that Christianity is a religion that has been and can again be extremely violent. They say Americans are brutal and dishonest as a culture; citing genocide against American Natives and constant treaty violation to steal their land, and Americans lying their way into a war to steal half of Mexico. They say Americans are so unstable we had a civil war because so many of us wanted slavery and were willing to kill for it.

They say that the US has always been a place of violence, and Americans are a violent people.

Many of their media pundits explain that Chinese troops cannot leave Mexico and Canada because Christian extremists will take over and it’ll be a safe-haven for Christian terrorists committed to get to China and kill their civilians in terrorist attacks.

In fact, you can bet that the same propagandists who have so little disregard for human life that they engage in endless wars have already invested thousands of hours to create propaganda against Americans should that be useful.

Regarding Muslims, US political and corporate media “leaders” are bigots and religious hypocrites because they claim Muslims do not support terrorism beyond a very few criminals, while taking action to attack, invade, and occupy Muslim countries that more loudly proclaims: “Muslim nations and terrorism always go together.” This bigotry and hypocrisy, of course, must lie to ignore:

We the People have obvious reasons to challenge “Paris terror” as a .01% false flag attack, including game-changing histories of creating ISIS, supplying them, and usual use of false flag attacks to sell the 99.99% on offensive war; this time on Syria.