Our Immigrant Problem in Calais, France

RT News over the last couple of days has opened their international news coverage with the situation in Calais, France of immigrants trying to seek refuge, asylum in England.         Much ado is given by Prime Minister Cameron to building fences, acquiring more sniffer dogs, and putting more resources in place to prevent their entry. The French seem […]

By Peter Phillips July 18th 2015 was the first day of this year’s summer camp for the world’s business and political aristocracy and their invited guests. 2,000 to 3,000 men, mostly from the wealthiest global one percent, gather at Bohemian Grove, 70 miles north of San Francisco in California’s Sonoma County—to sit around the campfire […]

by Omar Ali* It must be emphasized that disagreeing with our government’s position on the Middle East, should be considered as a sincere effort to correct a policy, which has proved unworkable and brought untold sufferings to the Palestinians, and to certain extent to the Israelis, as well as the region as a whole. Immediately after the 1967 Arab-Israeli war, […]

Politics, War and Peace, World News
Slappin’ the Occupation Around a Bit

By Rebel Fagin This article is being posted today as a direct response to Netanyahu’s blatant attempt to manipulate the US into a war with Iran on behalf of a foreign nation with lies that even Mossad denies. I hate bullies; cowards who strike then run and hide behind big brothersback. Israel is one such […]

On March 11th, 2004, Spain lived the deadliest terrorist attack in its history. The mainstream media and political parties, accustomed to terrorism of ETA, thought at first that ETA was in fact behind the bombing. However, after subsequent police investigations and judgments in the field of justice, the focus of attention ended up posing on […]

War and Peace, World News
Why don’t we kick the Americans out of the Middle East? 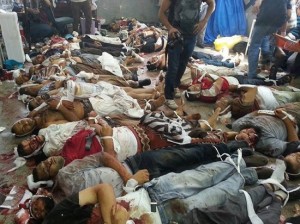 By Rebel Fagin Two security states, Israel and the USA, are currently developing in tandem and targeting similar populations. In the USA, economic disparancy is driving the development of the security state.  As the rich steal more they need to protect it.  Non-corporate crime in the United States, including violent crime, is down. Ted Kirkpatrick, […]

Tonight in San Francisco, Augusts 23rd, at a fundraiser for Children in the Gaza, Norman Finkelstein was the guest speaker. For those of you who may not be familiar with him, Norman Finkelstein is a professor of Political Theory, the writer of nine books dealing with the Israeli Conflict with the Palestinian People, an American […]