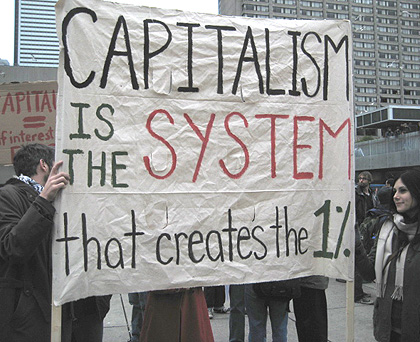 Just consider what the giant retailer has accomplished. Walmart perfected a scientifically designed, electronically based “just-in-time” system of distribution that is maximally efficient in getting stuff to people. This is a tremendous world-historic achievement. Walmart has proven, once and for all, how simple and easy it is to distribute the basic necessities of life to everybody. Perhaps even for free!

Walmart has also become one of the 21st Century’ greatest teachers. This too should be recognized! Economics these days have become increasingly arcane, maniacally focused on how to make maximum profits for corporations. Walmart has brought economic concepts out of the clouds and made them comprehensible for everyone. Economics is now something we all have basic life-experience with. Now we, the public, can recognize the tools of economics and learn to turn them to our own benefit.

At the same time, of course, Walmart is an odious construct. It abuses and exploits its workers, denies them economic rights, loots public money from every country, plays a fairly large role in the corporate destruction the planet, and it sells more guns directly to the public than any other commercial entity. These are open intentional predatory corporate policies that Walmart even brags about.

Thus arises what is perhaps the historic question that defines our Age: We all like the good stuff, so is the incredible destruction that Walmart produces, a necessary result of the technology or… does it emanate from the corporations that control it?

Everyone can now see that world ecological destruction comes not from a single corporation, but from a system that chooses only to use our wonderful technology for private corporate profits. They make choices in beyond public control that hurt us all. These choices are developed in secret behind corporate firewalls, justified as “private property” and “private profit” and removed from public control. Corporations even go so far as to tell us that fracking chemicals are “proprietary information” and therefor not our business! Thus corporations strive to seize and appropriate all human production away from human society and the very people who made this wealth.

So it’s not the technology that’s the fundamental problem. The negative aspects emanate from the corporate ownership.

Walmart is just a giant 99-cent store on steroids. The corporation receives massive tax subsidies and makes enormous profit, which is then removed from the public and hoarded in banks. Why not eliminate the middleman? Let’s keep the profits for the public and use the subsidies to support the full distribution of everything for free. After all, Walmart’s slogan is “Save money. Live better.” We should take them at their word.

When you walk into a Walmart there is… all this STUFF! Everybody knows that their stuff comes from factories all over the world. While millions of people engage in production, we can also see at Walmart that most of this stuff is machine-made, not made directly be people.

Walmart proves that production in today’s world is completely social. So if production is social, why is its distribution private? Walmart advocates, of course, that economic production should belong to private corporations.

Supreme Court Chief Justice John Marshall explains what a corporation is – and isn’t – in the 1819 Dartmouth College Case:

“A corporation is an artificial being, invisible, intangible, and existing only in contemplation of law. Being the mere creation of law, it possesses only those    properties, which the charter of its creation confers upon it…. Among the most          important are immortality, and, if the expression be allowed, individuality….”

So it is clear: a corporation is not an Act of God; it is not a law of nature. It is a legal construct – agreed to by people – that is empowered by law. It then appropriates social production privately and diverts the wealth that society produces together into the hands on a few.

Of course, Walmart’s legal counsel would respond to the court of the people that the corporation has incurred all the expenses to create this wonderful economic infrastructure for society. So therefore it should reap the profits in order to cover expenses and be rewarded for its contribution. What’s wrong with that?

Let’s examine this one.

One of the jobs of government is to create infrastructure. Infrastructure means systems like roads, airports, water pipes, sewers, ports, satellite communication systems, parks, beaches, scientific research, the Internet, health services, etc. These functions are expensive to establish, but, when finished, lower expenses for every individual. Once in place, infrastructure costs are simple maintenance and regular improvements. This is a perfect use for taxes. The public investment makes it up to everyone by providing services that make things easier. Throughout the 20th Century generally it was the public that built the infrastructure.

What happens in the case of a toll road? Back in 1700s America, government would allow a corporation to form, with private investment money, with the goal of building a road – say, from Albany to Syracuse. Since this combination expended its funds, they were allowed to recoup them by putting a Toll Booth on the Highway. In addition, they were allowed to continue to charge to make a state-limited profit.

The fee you pay at the tollbooth is really a form of rent. Rent is a charge based on monopoly control. Rent, and its evil twin, financial interest, is established without doing any work at all. It is the result of a legal privilege that exists even when there is no cost of production at all. We all know that banks love to charge you for using a different debit card. There are no people involved who do any work on this. Everything is handled electronically. The same with the humungous “service charges” on bounced checks. This is rent. It is unearned income. It is a major source of profit for capitalism these days. It is theft.

“… unearned income is getting money without working for it, getting money simply by lending money or by owning property and putting up a toll booth and  charging people an access price. So the economy is putting up tollbooths for education. If you want an education, you have to borrow from the bank. If you want to drive a car on a road, well, we’re putting up tollbooths on the roads; we’re turning the roads into toll roads. If you want to park your car, we’re now putting  parking meters on the sidewalks and the parking meters’ revenue’s sold off in Chicago to Wall Street for the next 30 or 40 years to get money to pay the interest to Wall Street now.” (1)

As corporations merge ever more closely with the state, they are seizing control of every kind of infrastructure. President Obama has proposed turning all the publicly built infrastructure of the last 100 years into “public-private partnerships”, where the public supplies the money and the corporations retain the profits. The goal is to build a future where corporations control everything.

Having set up a valuable infrastructure, Walmart as a corporate entity or a corporate person contributes nothing to the process. All the work is actually done by Walmart workers who are considerably abused and exploited. In essence, what the corporation does is function like a tollbooth on the distribution system and demand rent as a monopoly. We simply pay for access. That is rent.

Walmart as an entity could easily be abolished without harming its distribution system in the slightest. The big lesson is that so could every corporation. This is the direct implication of John Marshall’s comment above. If a corporation is a legal fiction, rent is a legal fantasy that can be undone by the same process of public agreements that created it. So sorry, Walton Family billionaires, you do no work; you don’t get paid.

Rent evolved beyond the toll road with the rise of the insurance industry. Once again, a corporation squats on the infrastructure and demands a tribute, a “profit”, for adding nothing, simply for allowing you the next step of access to what you need.

The next step was Cable TV. This monopoly claims to provide special services through wires, but they really just block you from accessing a program unless you go through them. Comcast claims monopoly control of an infrastructure and charge you rent for using their infrastructure.

The newest monopoly form of rent is being created right before our eyes – the Cloud. This newest form of electronic superstructure is based on distributing relative limited and stupid devices to the public, while keeping all the “intelligence” in centralized computers. Once again, you will pay rent for access for what you could get for free.

It gets worse. The World Economic Forum is an organization of the planet’s biggest capitalists. They hold a policy summit in Davos, Switzerland every year. These elite capitalists are well aware that capitalism is not sustainable and is beginning to devour its own base. Thus they are scheming up what they consider is a kinder, gentler version of private corporate property.

Out of this year’s profit fest, Frans Van Houten, CEO of Royal Philips, floated the ultimate extension of rent:

“Instead of selling products, businesses would retain ownership, selling the use of the goods they make as a service. Selling a product’s benefits instead of the product itself would create a powerful incentive for producers to design for longevity, repeated reuse, and eventual recycling, which would enable them to optimize their use of resources.”

The future is becoming clearer:  Either corporations will take control of everything in life, or the people will take over the corporations.

So let’s give Walmart the Nobel, recognize its historic achievements, and then take it over, in the name of the public, in order to serve the public. Those nice Walton folks can each keep one of their several estates to live in. But they will have to clean it themselves!