Michael Collins: The War on You 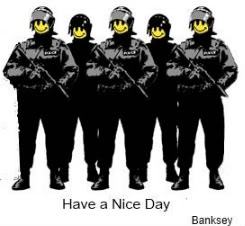 Let the word go forth from Washington! The corporate rulers occupying our nation’s capital have declared war on just about every citizen.

Have no doubt: those in the upper ranges of the top 1% of wealth in this country (aka The Money Party) want to kick you to the curb.

They want to reduce your social security and make you go broke paying for medical care.

They want to lower your wages and trash your retirement. They ignore the clear facts that we’ve had negative job growth since 2000 and the situation is just getting worse.

They want to ship jobs, factories, and entire businesses overseas and give companies that do that a big fat tax credit for doing so.

They’ve been given so much for nothing for so long. Now, they’re ready to take it all. It’s their time!

The most recent assault is the ridiculous debate about raising the debt ceiling. There should be no debate. Failing to raise the ceiling right now means deliberate default on debts, refusing to pay bills the government can pay. It’s called fraud.

The pressing need to fix the budget is a separate issue. Reduced spending and increased revenues should come through broad public involvement and open debate. It mandates that the rulers behave like adults.

But this crisis isn’t about putting together a real budget. It’s about creating a budget that punishes you, your family, and friends. It’s about taking your attention away from your vital interests to maximize income and control by The Money Party.

Were the leaders on either side of the debate serious, the Bush era tax cuts would be rescinded. These cuts on the top 1% were temporary. Guess what? Congress lied. When the temporary tax breaks ran out a few months ago, they were revived and renewed just when we had the greatest need for revenues.

The Money Party won’t give up its wars either. Iraq and Afghanistan have added $4 trillion to the national debt of $14 trillion. Why not stop the wars? How hard is that to figure that out?

Getting rid of Bush tax cuts for the super-rich, ending the wars, and moving out of the recession/depression would be huge steps toward balancing the budget. But that won’t happen with this Congress and this president. Why? That would cost the financial elite money for taxes and lost income for all those weapons they sell to support the wars.

The Attack on You Began in Earnest Just Years Ago

Congress enacted legislation in 2000 that allowed extremely risky investments in real estate and other derivatives, illegal for nearly a century.

In 2001, the big banks and Wall Street celebrated its newly purchased freedoms with a decade-long binge of fraud and risky investments. Like a greedy con artist, they took everything they could from people here and around the world until there was no more to take. We have now hit the wall thanks to them.

The outrageous expenses of wars based on lies caught up with us and shoved the deficit to new heights. The tax cuts for the top 1% took away revenues needed to balance the budget.

The money they steal from the Social Security surplus is no longer enough. They want to keep the tax in place for us and take an even bigger rake-off.

This crisis is manufactured by the ongoing greed of The Money Party. It is funded by the US Treasury. You pay for it, all of it.

This article may be reproduced with attribution of authorship and a link to the article.

39 Responses to “Michael Collins: The War on You”