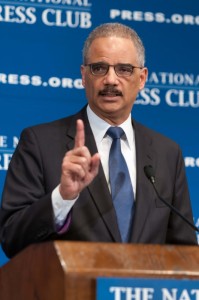 Holder received from the hosts the deferential treatment customarily accorded to high officials.

But New York Times reporter James Risen reacted from afar just after the lecture Feb. 17 by tweeting that Holder’s legacy is a “wrecked” First Amendment. Risen described President Obama as the “worst” enemy of press freedom in U.S. history.

The stakes are high as a new attorney general awaiting confirmation must decide whether to follow Holder’s lead in his dubious cases — or to reform the DOJ’s longtime culture of cover-up and its attacks on agency whistleblowers and other political targets.

Next month, Obama, his team, and celebrities from the Oscar-nominated film “Selma” will attend the 50th anniversary of the iconic “Bloody Sunday” 1965 civil rights march in Selma, Alabama — a state notorious also for the federal frame-up of still-imprisoned Democratic former Gov. Don Siegelman for what human rights activists worldwide consider to have been his non-crime in 1999 of seeking donations for a non-profit pro-education foundation.

Should the public react with praise for Obama-Holder accomplishments? Or with protest for promises unfulfilled?

The latter must be our answer. There are already too many sycophants, suppressed questions, and censored stories about injustice at the Justice Department, whatever the politics, race, gender, and rhetoric of its leaders.

For details and full links to a 4,000-word survey of Holder’s six-year Justice Department leadership and its media coverage, visit the Justice Integrity Project at http://ow.ly/Jt8NR.