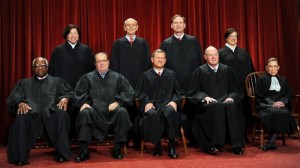 The Supreme Court of the United States consists of individuals who set legal precedents for the country. These decision affect the long-term viability of the country. It is their responsibility to understand the basics of the world so they can make sound and informed judgments. If they can’t do this, they have no reason to be sitting on the bench.

Court experts said justices take tech issues seriously, even if they make the occasional slip during oral arguments. The justices read “friend of the court” briefs from experts in the field, and some had experience in the realm of science and technology before joining the bench. Justice Stephen Breyer worked on regulations as a U.S. Senate staffer and wrote widely on issues related to technology and the law.

Technology has changed immensely since Breyer came to the court. A better argument would have been how he has kept up on current technology and trends and understands the cases at hand.

While justices to also turn to their clerks, who write many of the briefs, they should be doing the research themselves. After all, they don’t take on many cases per year and have the time to do the research. How much do they really understand?

One U.S. Supreme Court justice referred to Netflix as “Netflick.” Another seemed not to know that HBO is a cable channel. A third appeared to think most software coding could be tossed off in a mere weekend.

Sotomayor made the Netflix gaffe. She misspoke. It doesn’t mean she’s an idiot.

Kennedy asked the questions about software coding. Read the Computer World article and then claim you understand software patents. If you actually go and read the question in context, it is pertinent to the situation at hand and it was an intelligent question.

HBO has been around since the 1970s. There is no excuse for anyone to not know it’s a TV channel. This is especially egregious for Scalia who said he liked watching the Sopranos. Upon further investigation, it’s unclear whether Scalia knows exactly what HBO is.

the author of the Business Insider article didn’t check into the Mashable article, which was apparently written by someone who didn’t actually read the oral argument transcript. Scalia asked why a decision allowing retransmission of local stations wouldn’t permit retransmission of HBO. He asked this question after mentioning “distant signals,” which refers to non-local broadcasts (e.g. WGN, which is broadcast in Chicago and also carried by cable providers across the country).

There are thus three possible interpretations of Scalia’s question: 1) he thinks HBO is a local broadcast channel somewhere; 2) he thinks “distant signals” means everything on cable that isn’t a local rebroadcast; or 3) he picked a bad example off the top of his head or otherwise misspoke.

The Mashable article assumed interpretation #1 without really discussing it. This seems rather unlikely. The guy watches some TV (although here he says he has “CDs” of Seinfeld, so that’s not helping my argument). He says he watched The Sopranos, which was on HBO. It would be weird if he didn’t know where the show came from. #2 is also pretty unlikely since Scalia worked on cable regulation in the early 70s under Nixon (when distant signals had already been a legal issue for cable companies and were subject to ongoing regulation). #3 seems reasonably probable, since all of the justices say things of varying stupidity during oral arguments (with the exception of Justice Thomas).

So I’d say its at best 50/50 between Scalia thinking HBO is a broadcast channel and Scalia using a poor example or asking a question that didn’t follow from his previous “distant signals” comment (i.e. maybe he meant to say “If you can do this for local signals, why not for distant signals? And why not for HBO?”). The quote from the WaPo article I linked saying he has CDs of Seinfeld does demonstrate that the justices aren’t super tech-savvy, though. Good thing 26-year-old law clerks write their opinions for them.

Once one actually looks at the question asked, Scalia doesn’t appear to be a complete fool who doesn’t understand what he’s asking.

As for Scalia’s comments about Seinfield, he did say CDs. This isn’t a huge mistake. Most people still say “album” when talking about the latest CD of music. They also refer to Blu-ray as a CD. Many people also say “put the tape in,” referring to VHS when they are, in fact, putting a DVD or Blu-ray into their player.

There is an issue, however, when a justice continues to use the term “phonograph records.” Seriously, everyone would be okay with Justice Breyer using album instead.

These and other apparent gaffes by the justices during oral arguments have became a source of bemused derision, as tech aficionados, legal experts and others have taken to social media, blogs, YouTube and other outlets to proclaim the justices black-robed techno-fogeys.

“Everyone who’s anyone inside that courtroom is most likely an incompetent Luddite,” Sarah Jeong, a 25-year-old Harvard Law School student, wrote on her personal blog following a recent Supreme Court argument dealing with a copyright dispute over TV online startup Aereo.”

“Sometimes it’s just amusing and sometimes it’s really troubling,” Higgins said. “The justices are just unfamiliar with how the industry works. (They) don’t understand how software comes together.”

Some critics say the Supreme Court’s apparent lack of awareness about the technology that increasingly permeates the lives of everyday Americans could have real consequences as the court grapples with such issues this term as maintaining privacy in the digital age, when software is eligible for patent protection, and the future of the TV industry.

The video below uses every mention of the word “cloud” from the hour-long Supreme Court oral arguments in ABC v. Aereo on April 22, 2014.

This is not about justices being old. There are many people in their age range who have adapted and learned new technology. There are two thoughts on why this happens.

First, they don’t personally see a need for it, so they don’t bother to learn about it. They are ignorant and happy to be that way.

Second, they ask these questions to get the lawyers on record with their explanations and so the definitions of technology are preserved. This can be evidenced by reading the record or listening to the audio recordings. Many questions are hypothetical or rhetorical, so it can be presumed that they are searching for the precise details of the arguments.

much of oral argument is not about the colloquy between Justice and attorney. It’s about the Justices using your silly ass as a puppet so they can argue against each other. Understanding the subtlety of what is happening during oral argument is a skill that is really difficult for the layperson to get their head around, because constitutional doctrine is intricate, and complex, and so much of what is happening on the surface obscures the volatile political warfare that is actually being waged by the Justices.

Listening to the Windsor case is a good example.

It appears that, while the justices are not as tech-savvy as others, they can ask poignant questions and learn about the case at hand. Whether the final decisions are correct will be argued for years by others who are not sitting on the Supreme Court.

Supreme Court justices should be asking questions, which is precisely what Kennedy and Scalia were doing. It would detrimental if they went into court and presumed they knew everything about every topic before them. Yes, they do research beforehand, but clarifications are always better.