You Are Here: Home » War and Peace » What Did Petraeus Know and When Did He Know It?

What Did Petraeus Know and When Did He Know It? 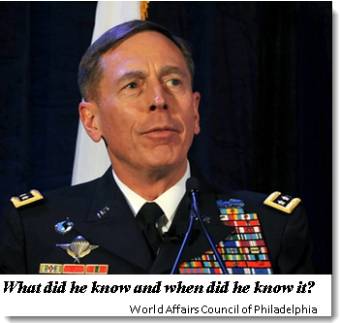 (Washington, DC, 11/15) The bitterness of the neocons knows no limit. They’re still having tantrums after being denied the unchallenged ability to pillage and plunder at will (and at our expense). Never mind that the public doesn’t want to hear it. The Congressional Republicans are jumping up and down over their big question: When did President Obama know about the affair between General Petraeus and Mrs. Broadwell? Talk about a misguided salvage operation. Their inquiries will spark some questions that they won’t want asked. (Image)

The real questions concern the behavior and motivation of General Petraeus in the aftermath of the murder of the United States ambassador to Libya, Christopher Stevens, on September 11, 2012.

When did General Petraeus know the sequence of events that preceded the murder of United States Ambassador Stevens, indicating the likely motivation for the murder?

The Petraeus CIA provided inaccurate information about events on the ground to the Obama Administration, particularly to President Obama and United Nations Ambassador Susan Rice. Did they know it was inaccurate?

If the Petraeus CIA mislead or withheld information from the White House or allowed that to happen, was it in the service of the Romney campaign or those clamoring for an attack on Iran?

At the end of an article by David Randal in The Independent, November 11, this provocative information appeared:

“The CIA has come under intense scrutiny for providing the White House and other administration officials with information that led them to say the Benghazi attack was a result of a film protest. It has become clear that the CIA was aware the attack was distinct from the film protests across the Muslim world.” The Independent, November 11

Early on, United Nations Ambassador Susan Rice stated that news of the anti-Muslim movie, Innocence of Muslims, inspired an angry mob to turn violent and attack the U.S. consulate in Benghazi, Libya:

“Our current best assessment, based on the information that we have at present, is that, in fact, what this began as, it was a spontaneous – not a premeditated – response to what had transpired in Cairo [a protest against the anti-Muslim film].” ABC News, September 15

Rice was corrected shortly after this statement.

The CBS News report on September 12 that the attack on the consulate was premeditated turned out more accurate than the information provided to the White House by the CIA. The attack and murder of Ambassador Stevens, CBS reported, was premeditated, initiated by “al-Qaeda affiliated” terrorists.

All of this was at the start of the 2012 presidential campaign.

When did General Petraeus know the sequence of events that preceded the murder of United States Ambassador Stevens, indicating the likely motivation for the murder?

According to the Daily Beast, September 19, three U.S. intelligence officials reported that “within 24 hours of the 9-11 anniversary attack on the United States consulate in Benghazi, U.S. intelligence agencies had strong indications al Qaeda-affiliated operatives were behind the attack, and had even pinpointed the location of one of those attackers.”

The CIA may have been one of the agencies referenced; if so, Petraeus must have known within 24 hours of Stevens’ death that the attack was a premeditated terrorist attack. But an October 19 column in The Washington Post by David Ignatius reported that both Obama and Rice received “talking points prepared by the CIA three days after the attack, on September 15, stating that a blasphemy riot at the Benghazi consulate triggered the attack.”

The Petraeus CIA provided inaccurate information about events on the ground to the Obama Administration, particularly to President Obama and United Nations Ambassador Susan Rice. Did they know it was inaccurate?

We have a report of the September 15 talking points memo from the CIA to the White House. We don’t know any specific information offered by Petraeus to the White House. But we do know that Ambassador Rice’s September 15 statement on three network news shows made her look either ignorant or complicit in an Administration cover-up. In a sense, Rice was the stalking horse for the notion that a “blasphemy” riot, like the one occurring in Egypt at the same time, was the kickoff for the attack in Benghazi.

From September 12 to the day of Rice’s statement, the 15th, Administration officials were tentative about the riot in Libya. Rice’s statement was the apogee of the blasphemous movie explanation. Rice paid dearly in the press. At that point, the White House quickly backed off the false thesis and pounded Romney for being so crass about a national tragedy.

It appears that Petraeus provided inaccurate information to the White House. He knew there was no blasphemy riot. When Rice took some serious criticism for her remarks, the general sat on his hands.

If the Petraeus CIA mislead or misinformed the White House or allowed that to happen, was it in the service of the Romney campaign and those clamoring for an attack on Iran?

We know that the Romney campaign very much needed an Obama foreign policy failure of major proportions for the debates. Romney made his awkward and inflammatory remarks on the attack the same day as the attack and deaths, September 11. Then his surrogates followed up at the end of September calling for the president to be “held accountable” for the attack and its outcomes. A Romney spokesman singled out Susan Rice for the worst criticism.

When the attacks on Rice failed to get the desired traction, Romney supporters showed up at Bob Woodward’s house in late October. They brought an “intelligence insider” who had special information on Benghazi. Woodward wasn’t impressed with the source and chose not to pursue the matter.

The answer to that question will be known if we ever find out the truth behind The Independent’s report that “The CIA has come under intense scrutiny for providing the White House and other Administration officials with information that led them to say the Benghazi attack was a result of a film protest.” CIA here means Petraeus and his crew. The FBI was investigating a lot more than sex with regards to General Petraeus.

Consider too Romney’s behavior at the second presidential debate, held on October 16, when Romney tried to cross examine Obama on his (Obama’s) initial response to the Benghazi incident.

ROMNEY: “You said in the Rose Garden the day after the attack, it was an act of terror. It was not a spontaneous demonstration, is that what you’re saying?

ROMNEY: “I want to make sure we get that for the record because it took the president 14 days before he called the attack in Benghazi an act of terror.

Notice how quick Romney was to try to capitalize on what he perceived as Obama’s failure to see the Benghazi attack as terrorism, almost as if he were invested in seeing Obama as a coddler of terrorists. It is reasonable to assume Romney knew in advance that the White House had been briefed with misleading information about the Benghazi attack. There is a strong likelihood that the Petraeus CIA knew the information was false. As a result, there is every reason to question who Petraeus was working for in this instance; citizens or the Romney campaign?

We may soon find out that most of the presidential campaign was conducted in the context of a parallel civil war between a faction of the intelligence community and the White House. Uncovering that information would be a true service to the country. Don’t count on ever getting the full story. The system couldn’t handle that any more than it could a real investigation of 9-11-01.

This article may be reposted with attribution of authorship and a link to this article.

Special thanks to Jill Hayroot for her contributions.

Michael Collins is a writer and researcher in the DC area. He focus in on election, financial, and political fraud along with other corruptions of the new millennium.

Hottest Articles of All Time

Check Out Our Favorite Blogs